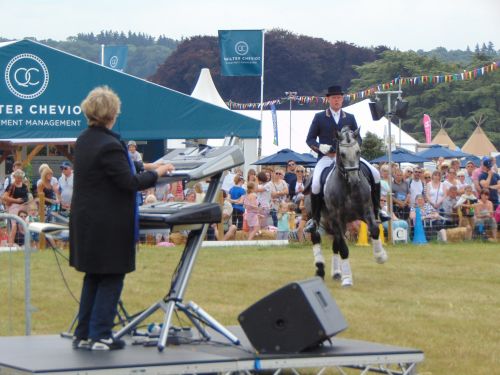 and Grand Prix Rider and Trainer

The Dressage to Music Wizard and a very well respected musician who brings her talents to the dressage arena. Her ability to play any style of music on most instruments comes from years of working with top recording artists world wide, playing all styles of music from classical to current, with every other genre in between from all eras.

The originator of Dressage to Music as we know it now in 1980 , with Olympic Star, Jennie Loriston-Clarke,Gaynor has created unique competition music for some of the World's best known Dressage Riders, as well as dressage riders from Riding Clubs, individuals, anyone who has asked her to produce a Competition CD.  Riders using Gaynor's Competition music have appeared successfully at many International Events including Goodwood International several times, several Olympic  and Paralympics since 1980, WEG, High Profile, MCI International, The Horse of the Year Show, BBC Countryfile. Currently she has had 11,242 winning routines, averadgng 275 to 310 winning routines a year, every single one different, every one unique. No patch and paste, all recorded specifically for each horse from scratch. However Gaynor's mudsical career started in a very different area of the music industry and as a classically trained pianist she has become a well known composer for TV and Film and has two successful Musicals under her belt.